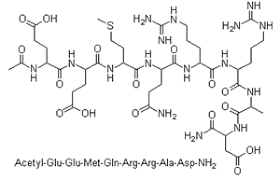 SNAP 8 peptide’s scientific name is Acetyle Glutamyl Heptapeptide-1. It is being tested for use for anti-wrinkle solutions. Studies show that SNAP 8 has properties that enable it to reduce the depth of wrinkles that are caused by everyday muscle contractions. In animal test subjects, it has shown significant results around the eyes and forehead. This product is considered to be a milder, more cost-effective and safer alternative to Botulinum Toxin. SNAP 8 works similarly to Botulinum Toxin by targeting the same wrinkle formations, but in a unique way.

VIVO testing was performed to determine how effective small peptides are with providing stability for the SNARE complex. This allowed the researchers to follow the thermal stability and formation of the reconstituted SNARE protein complex. This basically evaluates the effectiveness of the peptides that are patterned like SNAP-25 N and its ability to amass with synaptobrein and syntaxin that is being formed with the SNARE complex. The final result was that the short peptides that came from the N-terminal end of SNP-25 were able to compete with the natural protein and stop it from forming SNARE complex by changing the stability.

Another test was done with test subjects. The cream used consisted of 10 percent SNAP 8. Researchers obtained silicon imprints from around the eyes of 17 test subjects. These silicon imprints were taken before the test began. The test subjects applied the cream twice daily, and then another sample was taken 28 days later. The imprints were analyzed using control laser scanning microscopy to see the difference between the skin surface of the sample taken before and after treatment. In order to see a three dimensional view of the samples, skin topography images were created. Within these images, it was observed that the depth of the wrinkles had decreased significantly after receiving treatment for 28 days. The max reduction that was seen with the 10 percent SNAP 8 solution was 63.18 percent.

SNAP 8 is a copy of the N-terminal end of SNAP-25. This competes with SNAP-25 to position itself within the SNARE complex, which then modulates its creation. When the SNARE complex is destabilized slightly, it is impossible for the vesicle to release neurotransmitters in an efficient manner. Because of this, muscle contractions are reduced, so that wrinkles and lines are prevented. It will also help reduce existing fine lines and wrinkles by inhibiting the formation of SNARE complex and the release of catecholamine. With regular use in test subjects, it also prevented the development of wrinkles and lines.

Clinical studies show that SNAP 8 helped to reduce wrinkles surrounding the eyes by up to 63.13 percent. Testing for vitro and vivo efficiency showed that SNAP 8 has 30 percent more activity than parent peptides like Argireline.